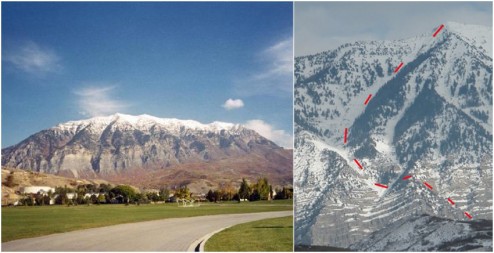 Mark often imagined lines down the west face of Cascade Mountain.  Wide alpine bowls tighten to rock lined chutes before ending abruptly in a massive limestone cliff band that wraps for miles around the peak.  The chutes are in plain sight of  Orem and Provo, Utah but the wide band of chossy rock is unappealing to rock climbers and skiers alike.

Armed with Mark’s brother’s bolt gun, a handful of rap anchors, and a comical quantity of rope, we climbed Cascade and ate a mid-morning sandwich while we waited for the snow to soften.  The snow was icy on top, covered in roller balls through the middle and didn’t get good until about the last 1000 feet of silky corn skiing.  While the route isnt steep, it’s hard to forget about the huge exposure below.

When we reached the end of the snow, where ramps of steep loose talus alternated with crumbling shale and limestone cliffs I began to rethink our plan.  From below the steep benches weren’t apparent.  On top of that, the best rock seemed to be just below the edge of the terraces which would make both bolting and clipping the anchors an intense chore.  Mark had hoped, if we put in some well-placed bolts, that the route might gain some popularity.  It certainly looks aesthetic from the valley.   But if we were forced to drill over the edge the bolts would be near impossible for others to find.

A little disappointed, we reassessed then began moving towards plan b.  We climbed over a nearby ridge and then began the long scramble down a ravine that cuts through the cliffs.  The route was less direct than what we hoped for, but required only a few short rappels before we were booting down the pine-needle-and-tree-trunk-covered avalanche debris pile below the cliffs.  Fat, old trunks violently deprived of all their branches and most of their bark were an unambiguous reminder of the huge slidepaths overhead.  With skis on our packs, we thrashed through the spring greenery back to the car.

There are no comments yet, add one below.