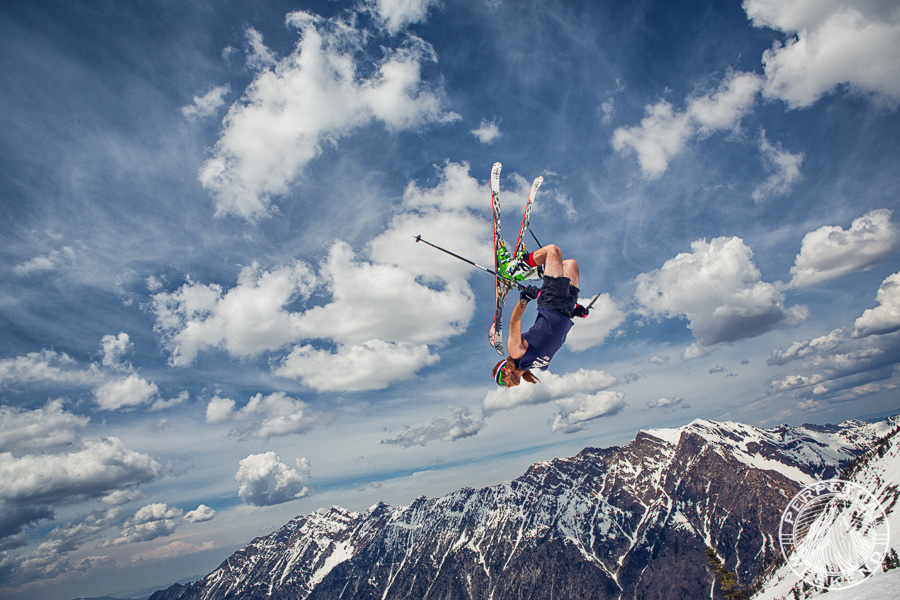 2013 was a good year and here’s evidence. What a privilage to travel with so many enagaging people! Here’s to more learnin’, travlin’ and smilin’ in 2014! END_OF_DOCUMENT_TOKEN_TO_BE_REPLACED 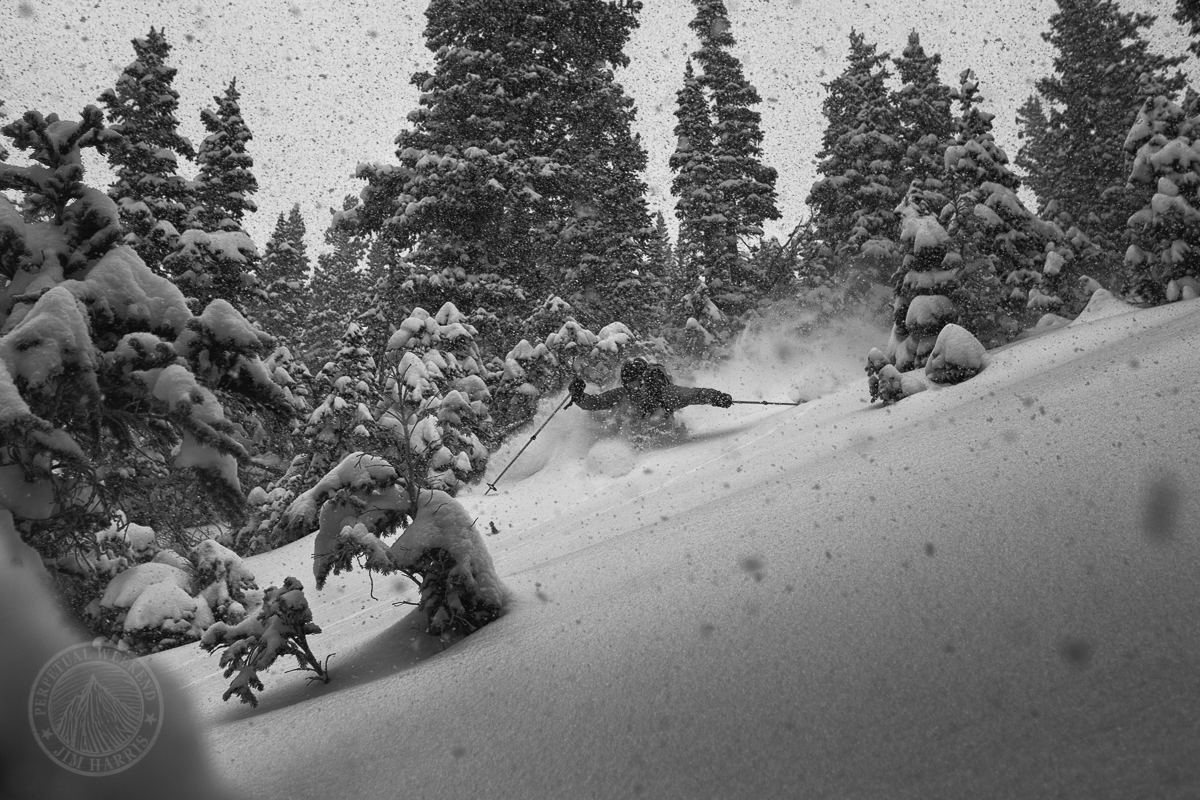 It snowed about a foot yesterday and, with a few inches under that from the week before, Ben and I decided to have a gander at the skiing opportunity in Little Cottonwood Canyon. Most slopes are still grass and rock, but we found some good turns on some of the more favored slopes at Alta. END_OF_DOCUMENT_TOKEN_TO_BE_REPLACED 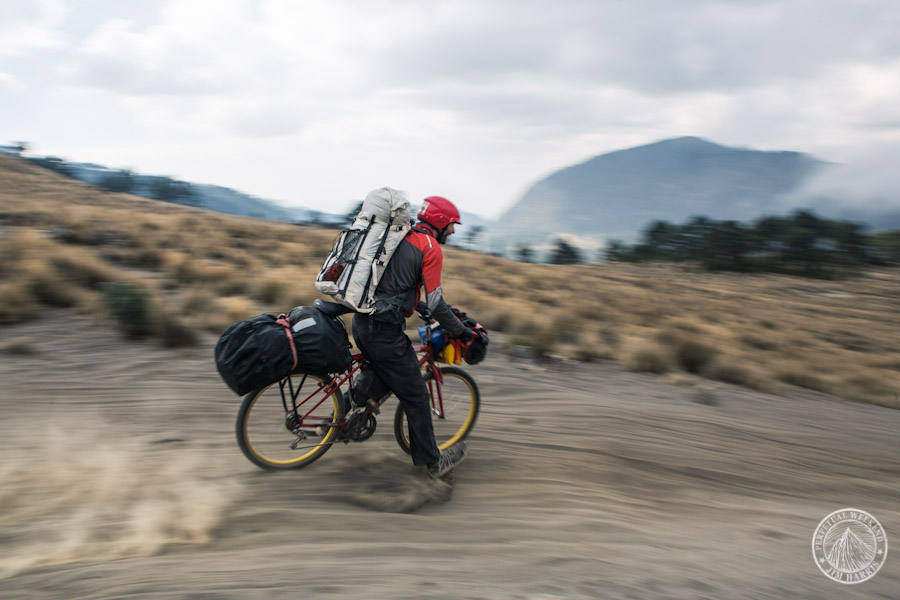 Windmilling his kayak paddle into the breeze, Luc Mehl, 34, pulls onto the sandbar at the mouth of Mexico’s Rio Antigua and squints at the novelty of a seascape horizon in the hazy afternoon glare.  Two days of sleepless dysentery have drained Mehl’s prodigious vigor and his hands are blanched and clammy as we high-five. Still, he’s grinning with accomplishment in the salt air.

Eleven days earlier we’d set out pedaling bikes strapped with mountaineering and whitewater paddling gear in Cholula de Rivadavia, a ciudad sixty miles east of Mexico City. Without ever having visited Mexico before, Mehl composed a 220-mile bike/hike/packraft triathlon first to Pico de Orizaba (18,491 ft) and then descending through rainforest hamlets to a whitewater river. Now at sea level, we stand at the end of Mehl’s line. END_OF_DOCUMENT_TOKEN_TO_BE_REPLACED

Utah has gotten wallopped with its first big snowstorm around this week each of the six autumns I’ve lived here.  This week it began snowing in the mountains on a Monday night and after seeing facebook pictures of trail breaking in deep powder Noah Howell, Ben Peters, John and I decided to check it out.  With most of the NWS’s remote snow-sensing stations still decomissioned from summer we hoped that we’d find as much snow in Little Cottonwood Canyon as we’d heard had fallen in the mountains outside of Ogden.

END_OF_DOCUMENT_TOKEN_TO_BE_REPLACED

My dad and I parked the car at the north end of Capitol Reef National Park and began heading south, unsure if our hypothetical route would work.  We had a few hangups where vertical canyon walls forced us to backtrack and a few other places where I think my dad was surprised to find himself climbing 5th class terrain, but we found a route through nonetheless.   At the end of the week a retired couple in a luxury sedan give us a lift back to our car.

While riding in the Uintas this week we came across an aspen tree with “The Trails End” carved into the bark.  The graffiti was dated 1936.  That spot is no longer the trail’s end (apostrophies having been less popular 75 years ago) and we continued the grind up to the ridge.

Summer is in it’s death spasms here and the trees’ chlorophyll has gone south leaving the leaves to their annual pyrotechnics.  The maples have a clear jump on the transformation with the aspens trailing a week or two behind.  Still, in the high country, aspens are far enough along to prompt Frank to reitterate the phrase “lemon-lime” about a dozen times on yesterday’s ride.  Here’s photos from a few recent rides.

At about 4am yesterday, Davide and I left our trailhead bivy spot and began the climb up the Grand Teton.

Sometime around midnight the sky began clouding over and what began as a cool, crisp night was warm and muggy when we started walking. END_OF_DOCUMENT_TOKEN_TO_BE_REPLACED

We scampered up Alta this morning to make some August turns.  It was a quicker hike than I expected – just over an hour to the top.  Little patches of snow in the shade were frozen hard on the way up, but the chute catches the sun early and was pleasantly soft by 8am.

Grom stopped to watch us ski the apron then let us hop in the truck for a ride back to the base, making the “Alta Ski Lifts Company” name truthful even in August.

Davide and I headed out earlyish today, hoping we’d beat the forecasted storms.  We didn’t.

My glasses were fogging when it was still dry due to a steamy first day of August.  Then they were totally hosed once it got even wetter.  Slithering downhill looked like footage from Monet’s helmet cam.  I achieved a level of soaked-muddiness where the first thing I did when I got home was go to the backyard and hose off my sopping shoes, socks and shorts while still in them.  Minutes later trail-colored water was swirling around the bottom of the shower.

Allison and I spent three consecutive days skiing together.  Given our often conflicting schedules, that was kind of a big deal.  On top of that, it snowed.  A lot.  Like 3+ feet.  We spent two days skiing sheltered terrain along the Park City ridgeline as the storm pounded then lapped the Cottonwoods powder circuit as the clouds parted.

Utah’s slot canyons are high-contrast places.  Cold, rough sandstone appears warm and flowing; noon sun is intensely hot while deep in the perma-shade of canyons the temperature is 40 degrees colder; cameras have a rough time metering where murky shadows are split by high-watt beams of sunshine.  And then there’s impracticality of keeping delicate, expensive cameras dry in a wet, sandy environment.

Rather than acting as deterrants, I suspect the high-contrast qualities of southwest Utah prompted photographer Steve Lloyd to propose a photo-centric trip to Escalante National Monument.  Steve had a vision for a complex shot and set about finding a reliable group to help bring the image to fruition.  Kevin Brower, Steve and I drove south, stopping for a quick sunset bike ride before meeting with Nick, Joe and Jordan later that night.

Escalante is, by desert standards, incredibly green this fall.  Everything is blooming and the fine red sand is a storyboard of foot and tail prints from chipmunks, mice, lizards, toads, spiders, snakes and scorpions. And ants.  After a very snowy winter followed by a rainy summer, the ants are having a banner year.  We chose to camp in the middle of a sprawling ant metropolis.  Pulling my gear out of my pack this morning I discovered dozens of ants that had hitchhiked in the folds of my sleeping bag, the corners of my wetsuit and others that had insinuated themselves inside sealed ziplock bags.  Yes, it’s been a wet summer in the desert.

With huge flash floods freshly recorded by stickjams high in the trees, the slots canyons are full of water.  This means that canyons potholes, which can sometimes be difficult to climb out of, are brimming full and easy to escape from right now.  It also means that long sections of the canyon we descended were flooded.  We doggy paddled thought the funky water for long sections, fingers crossed that submerged cameras were staying dry.

Steve shot the location he had envisioned and came away with bunch of beautiful images.  I got to watch a real-deal photog setup and manage the scene of a difficult shot.  Plus, we all got to slither and swim down a beautiful little canyon. Mission accomplished.

We spent two weeks on the hoof with a week of beautiful weather followed by a character-building week of rain, t-storms and snow. Here’s the evidence:

Before we skied down Hypodermic Needle a few days ago, the clouds broke just enough to allow a beautiful view of Pfeiff’s NW couloir.  The route follows a rock slab ramp for a few hundred feet before making a neat turn into a rocky funnel above a long apron that fans out 1300′ below the rocky peak.  The upper ramp is visible only in profile, if at all, from low in Little Cottonwood and Thunder Ridge is really the only place from which one can observe the entire line.

Noah Howell and I snacked on the summit and had a quick pow-wow to discuss how to best manage the pocket of newly drifted snow just a few feet below the entrance to the line.  It seemed unlikely that the drift would be react to our weight – we’d both been out skiing the past couple days and hadn’t found sensitive wind drifts – but at the same time if the drift did avalanche there’s a chance that one could be carried over the cliffs below.  In deference to Murphy’s Law, I built a quick anchor and belayed Noah as he stomped the pillow then jump turned down snow that was alternately crusted and chalky.

After ten years of exclusively telemark skiing Noah now owns an AT setup and that change chas elicited an outpouring of OMG’s! posted to his Facebook profile.  With a level of “I’ll figure it out as I go” nonchalance that makes me jealously shake my head, it seems that his first few heel-locked outings have all involved some sort of ropework above an objective hazard.  Dude’s got skills.

A previous party had left a mystery anchor – webbing coming from somewhere under snow – so that one could be roped the final bit before reaching the bolts.  I gave the webbing a few good yanks and decided to rappel but avoid weighting the unknown system.  The snow around the bolts had sluffed revealing water ice beneath and so it was a welcome mental crutch to have a rope running though my hand while I downclimbed. Here, Noah “No Place Like Home” Howell hops down to the buried mystery anchor.

As Noah downclimbed I noticed that the bolts had been engraved and I really got a kick out of the subtlely placed wit, all the more meaningful because I was perched above a rocky drop with not more than two inches of my boot toes edged into the ice I’d been doggedly kicking at.

The rappel down was straightforward and, with ropes coiled, we hop-sideslip-hopped down crusty snow down the lower half of the route until the aspect shifted just enough that the snow turned from shiny, irregularly breakable crust to dense but soft powder.  The snow down the valley was getting damp on this warm day but the exit was quick and painless, which is about all I’ve learned to ask for from skiing out Hogum.

Here’s more photos from the tour:

Ty, Ian and I skied the Hypodermic Needle couloir, which is regarded as a local classic due to it’s steep pitch, narrow rock-lined walls and it’s 2000 foot vertical drop.  I’ve approached the Coalpit headwall by a number of routes, all of them slogs, and I think the route we took this time – White Pine lot to the Obelisque, down to the base of the Needle, then up the last big push – was the most enjoyable.  Here’s photos: